I’ve been wearing Glossier Lash Slick for the past few weeks, and I want to share my first initial review. I’m not a huge Glossier/ITG fan, but I do love natural mascaras and I had some store credit I wanted to use. (Edit August 11th, 2018: Scroll to the end of the post to read my thoughts on the mascara after three months of regular use.)

Glossier claims that this mascara is “extensions without the extensions.” I think that’s true if (a) you prefer natural lash extensions, and (b) your natural lashes are relatively long, full, and curled. I think this mascara looks good on me, but most mascaras tend to look good on me. Check out my “Mascara” story highlight on my Instagram to see close-up pictures of it in action, including post-cry and at the end of a fifteen hour day. I’ve also included several not-so-glamourous shots below. Click on the photos and feel free to zoom into my pores. Please note that I did not curl my lashes nor did I use primer. After the photos, I’ll talk more about the formula and why you might like or dislike Lash Slick. 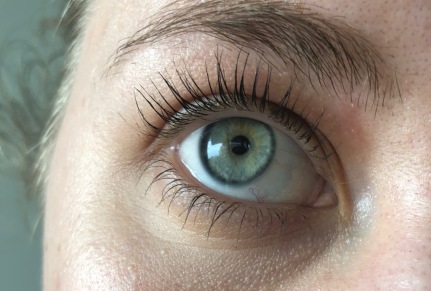 A closer look at Glossier Lash Slick on my lashes. 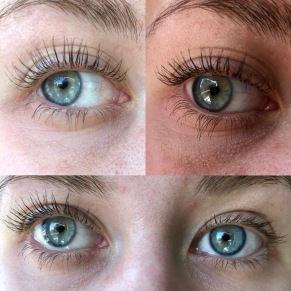 Now, onto the actual review. Glossier claims that Lash Slick is a “fill form” mascara with tiny fibres. This isn’t a tubing mascara in the same way that Wowder isn’t a powder. If you dislike tubing mascaras, I would avoid this.

I am fortunate that I don’t have to worry about my lashes holding a curl. From what I’ve read so far, most people with straight or downward-facing lashes have been disappointed by Lash Slick. If you tend to go for waterproof formulas to avoid droopy lashes, this probably won’t work for you. (Update: I’ve gotten a few hits from Google searches like “does lash slick work on asian lashes” – I can’t answer that from experience, but based on the blog/IG posts I’ve read, Lash Slick does not add or hold a curl.) 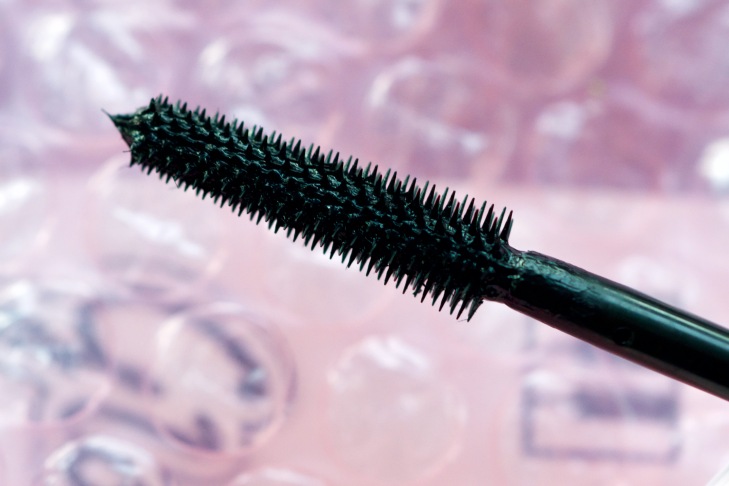 This is not the formula for you if you’re looking for volume. You can fake it by tightlining, but you might want to choose a different mascara if you have sparse lashes. Like most tubing mascaras, it doesn’t layer well – one coat is optimal to avoid that hey-have-you-ever-tried-younique spidery look.

For me, the biggest downfall is that it will flake and smudge a bit throughout the day, especially as I get oilier. It’s not very noticeable and it’s easy to touch up throughout the day, but it’s something to keep in mind. It also breaks down as I break down (everything makes me cry), so I wouldn’t wear this while walking in the snow or rain. If you have dry eyelids, live in California, and have the emotional range of a teaspoon (thanks Hermione), you probably won’t have to worry!

It reminds me a bit of the Revlon Mega Multiplier mascara I tried from Influenster last summer. It’s also similar to @cliniquecanada Lash Power, but Lash Power survives random cry sessions and a variety of weather conditions. The Lash Slick wand is better for separation than those two. I tend to like rubber wands, though I often manage to stab myself.

The packaging is functional, but not to my taste. My “I’m not like over girls” phase in kindergarten caused me to dislike light pink, and I’ve never really gotten over it. This is the kind of product that will look good on Instagram. It has a typical mascara chemical smell. Note that this is cruelty-free, but not vegan. 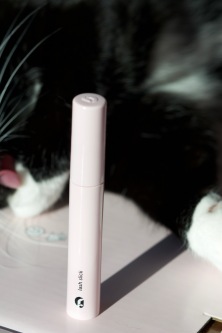 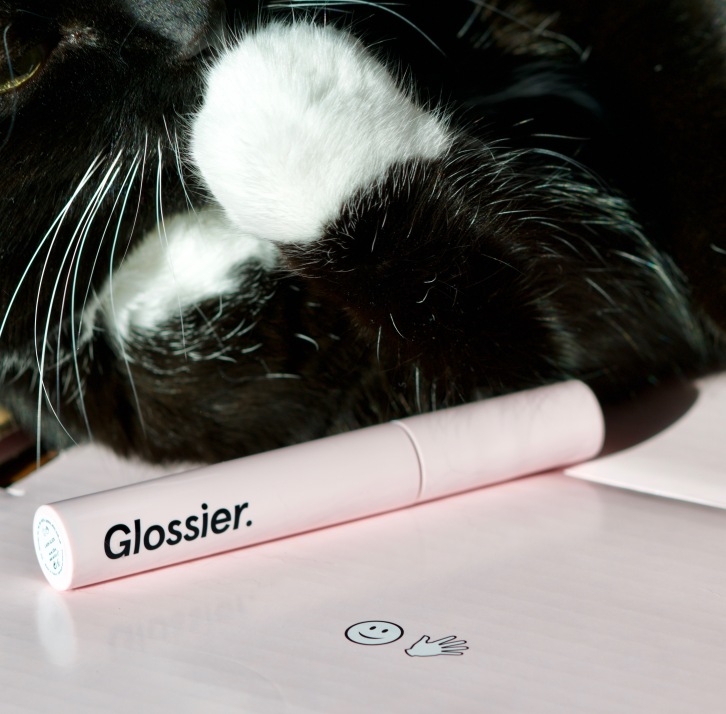 (My cat is a Glossier model. Shop through her rep page so she can get the fancy treats.)

Overall, I’m surprised by how much I like this mascara. When I’m done this tube, I’ll probably switch back to Lash Power because I cry easily and like to spend time outside when it’s snowing. Would you try Lash Slick? I’d love to hear what you think! 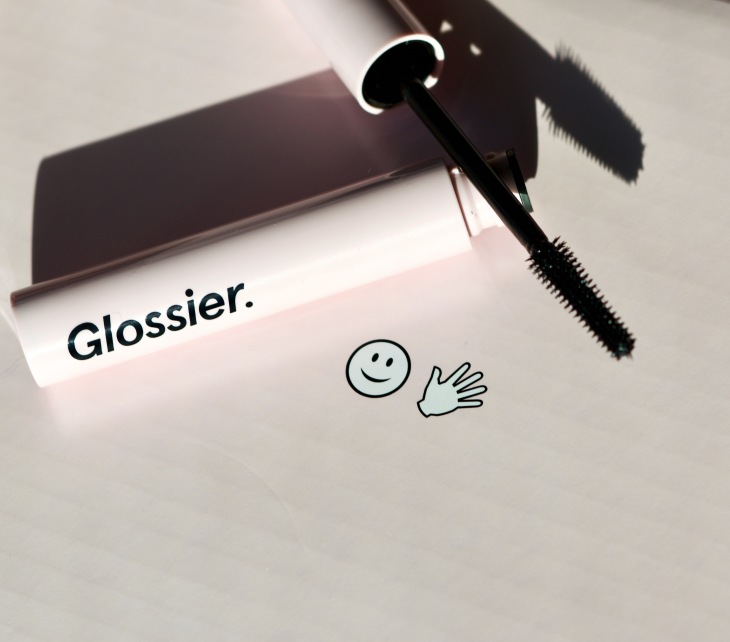 Check out my previous Glossier reviews:

I was definitely less into beauty in 2019 and I only have three favourite products to show for it. These are all products I have or will repurchase. @biodermacanada Hydrabio Serum became an integral part of my PM skincare routine. I notice a huge difference in my skin the following day if I skip it. @bitebeauty custom lipsticks were so fun to make. I love the colours, but these made it into my favourites because it was such a fun memory with @almostneverontime. @lisaeldridgemakeup velvet lipsticks are comfortable mattes that wear well and come in beautiful shades. Full reviews with pros and cons of each to follow! . . . . . #beautyfavourites #makeupflatlay #lisaeldridgemakeup #velvetribbon #velvetmuse #velvetmyth #bitebeauty #liplabxbite #customlipstick #bioderma #hydrabioserum #skincarefavourites
Here’s a cute little brush from the Koyudo’s Somell Garden collection. The handle is walnut and the tips of the bristles are dyed from blueberries. It’s technically a highlighting brush, but I like it for loose powder as it’s soft and dense while still feeling fluffy. It’s very small, so it’s been living in my mini makeup bag for the past couple years. ______________________ #fude #koyudo #bbloggersca #makeupbrush
My birthday makeup: @narsissist x Sarah Moon True Story Cheek Palette – I don’t use this palette often enough! Today I’m wearing Unwritten with a bit of Devotée mixed in. @yojiya_official Kokutan Blush Brush – This brush is amazingly soft and gentle. It does pick up quite a bit of pigment, so I prefer it for for less pigmented blushes (which 90% of mine are) or layering blushes. It has a good amount of floppiness for blending, though it’s fairly small. I also like it for setting my undereye area because it is such a gentle brush. This was a lovely gift from the lovely @pickyp11 :) @chanel.beauty Rouge Allure Velvet Luminous Matte Lip Colour in 69 Abstrait – This is pretty comfy for a matte, it wears well, and it’s a gorgeous pink. @burberry Wet & Dry Eyeshadow in Shell – This is so shiny and pretty and simple. I’ve gotten a lot of compliments on this in the three years I’ve owned it. @rephr.to 01 brush – This is a classic blending brush, but it works well for eyeshadow application on days when I don’t feel like grabbing another brush. I’m very happy with my Rephr brushes and would definitely recommend them. I haven’t forgotten about that blog post I promised.
Today’s makeup: @chanel.beauty Rouge Coco Lip Blush (414 Tender Rose) – I debated purchasing this for the better part of 2018, and then eventually purchased it on the last day of December. It was included in too many ‘best of’ videos/posts and Shoppers was having a good points promo, so I went for it. I don’t love the colour (it’s a bit too light for me) and the formula doesn’t wow me, but it’s pretty good for a multipurpose product. @cledepeaubeaute The Foundation – This was a gift from a lovely friend. I love how this foundation applies and how it looks on my skin throughout the day. It’s my skin but [much, much] better. It’s medium coverage, but still very natural. My skin doesn’t get as oily as usual, and it never looks cakey or patchy. It has a “natural rose essence that inspires feelings of elegance and luxury” that is kind of annoying, but luckily it disappears within minutes. I don’t think I would ever purchase this because of the price and the abysmal shade range, but I’ll enjoy it while it lasts. @ctilburymakeup Eyes to Mesmerise (Marie Antoinette) – This is still my favourite cream eyeshadow. I like to apply it along my upper lashline and then diffuse it upwards.